What a busy week! I bet the kids sleep in this weekend. Monday Olivia and Lucas had ski club after school.  It's been cancelled for a few weeks now. First it was too icy (snow melt and refroze) and then too cold (a week of -20 or more) so it was great to go again.

Tuesday was the Cub Scout Blue & Gold Banquet. Besides leading a Den of 9 Scouts I am on the Planning Committee and I am the Awards Coordinator. Lots of time went into organizing the Advancement for 38 Scouts. There was a little over 100 people in attendance.

The Banquet is a potluck and so many good things were shared... main dishes.... 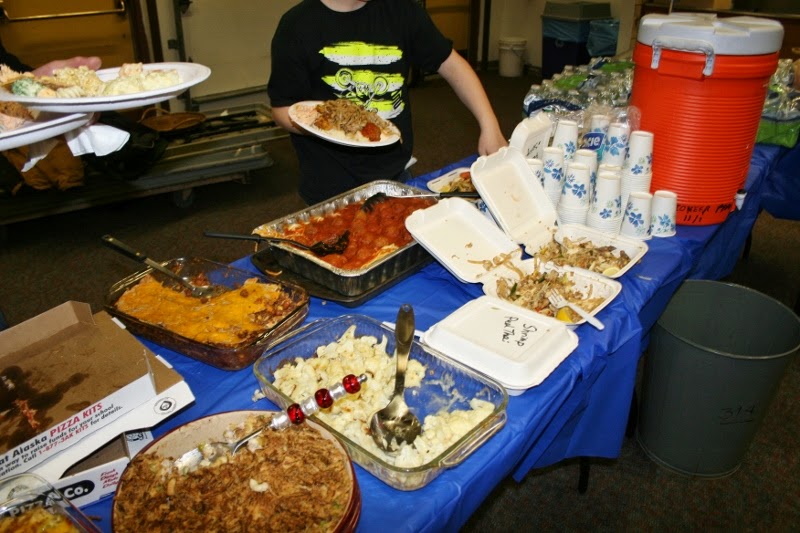 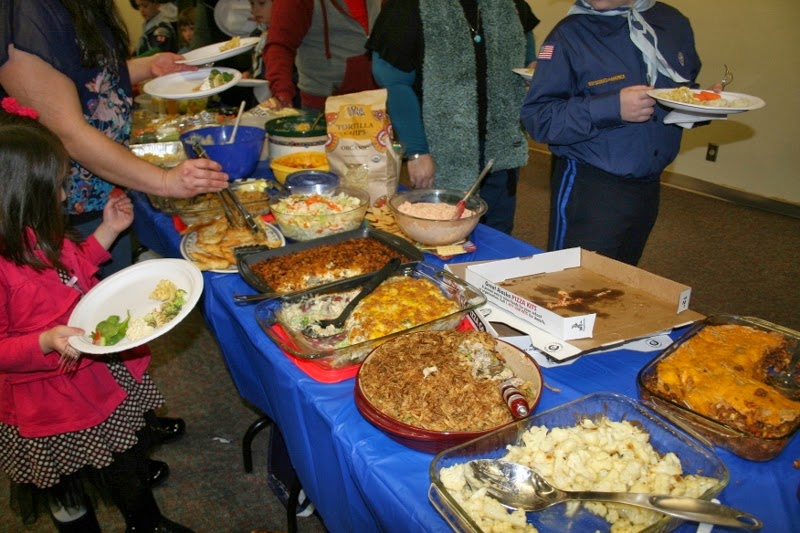 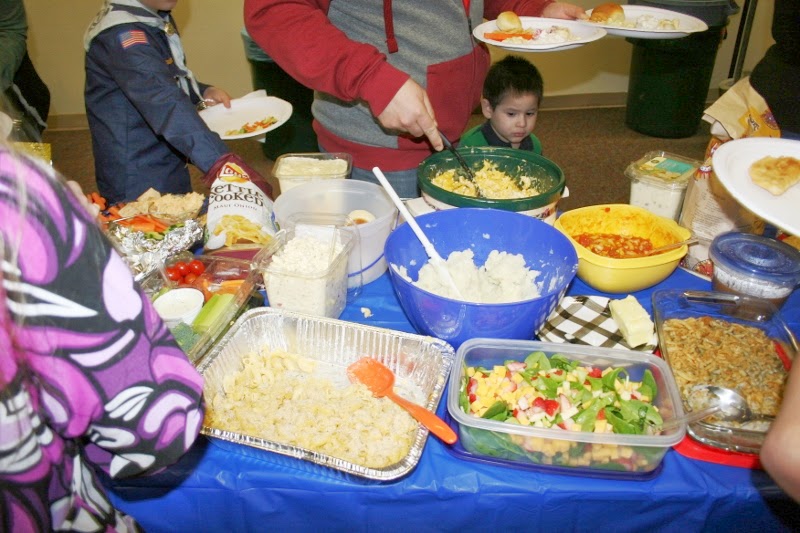 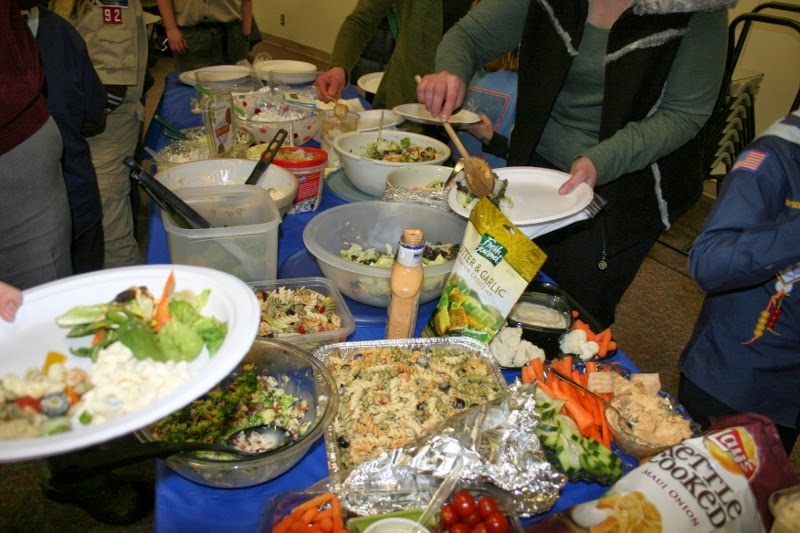 ... Alaska Salmon, Moose and even a whole turkey! 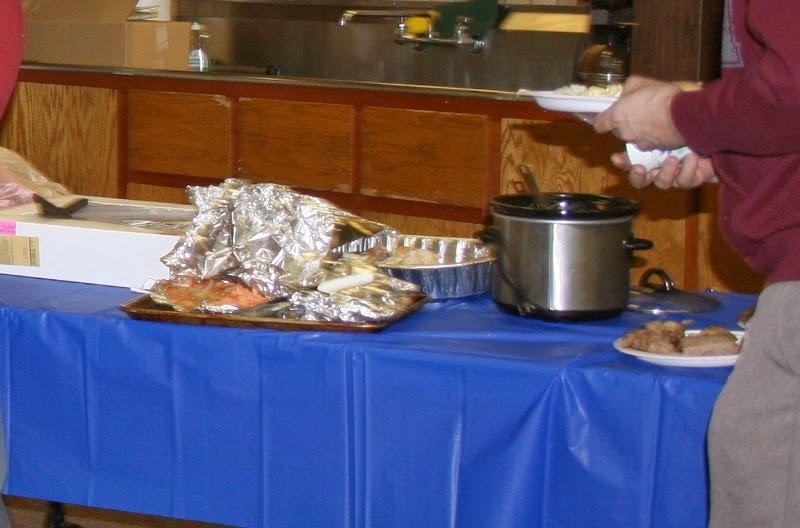 I must have put about six hours into this awards table. Everything is recorded online and then I purchase at the Scout office. Two hours alone was spent writing out the cards and attaching the patch, pin or belt loop to it. The little portion cups have activity segments for the last four Pack meetings. Keeping track of who attends what is a chore! I am the only leader who knows all the kids. 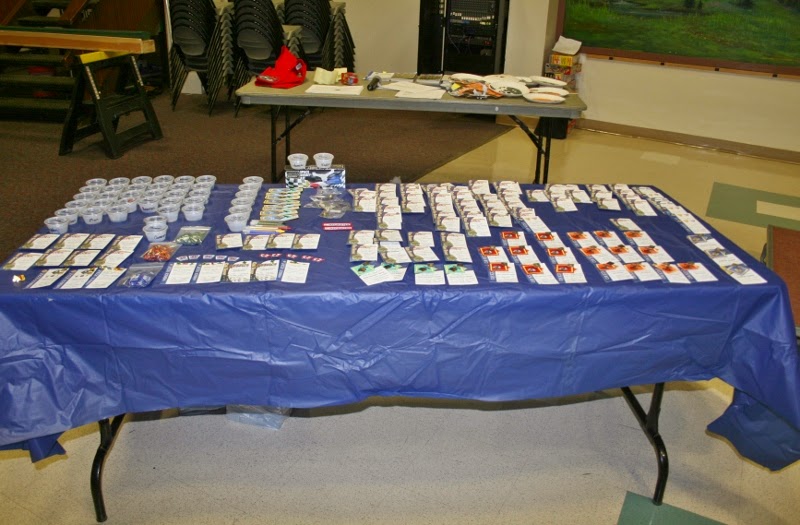 I won't share all the photos (we took over 200), but each of the 5 dens performed skits and sang songs. My Den sang a grace before dinner that we wrote ourselves. This is our skit "Old Akela Had a Zoo". The boys start out behind the curtain and then move out to the side. The song had actual animal noises... yes, I spent hours and hours creating/editing the music with sound bits found online. I need to purchase more fabric and sew the curtains so it looks nice, but will have to wait until they get some in. 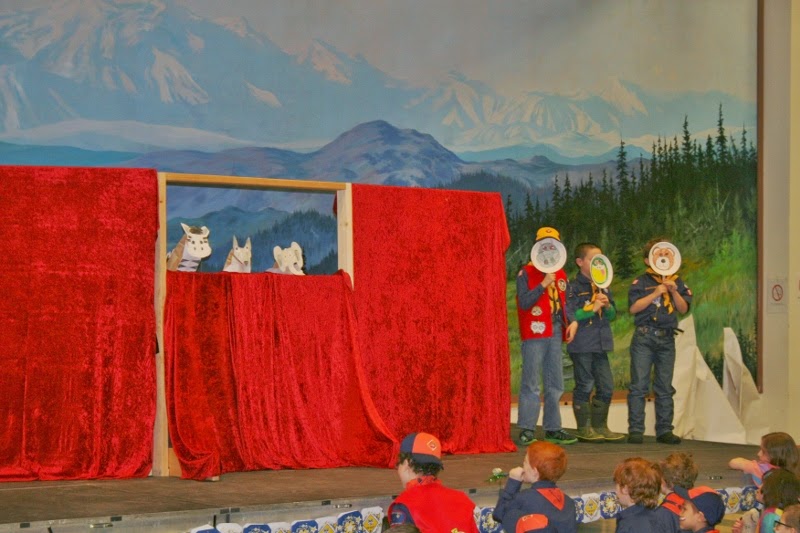 Emily is an enormous help to me. I couldn't do it without her. She looked so beautiful. I, on-the-other-hand, better get back to going to the gym. I've put on a lot of weight this winter and my knees are complaining. I know I would have more energy, too. 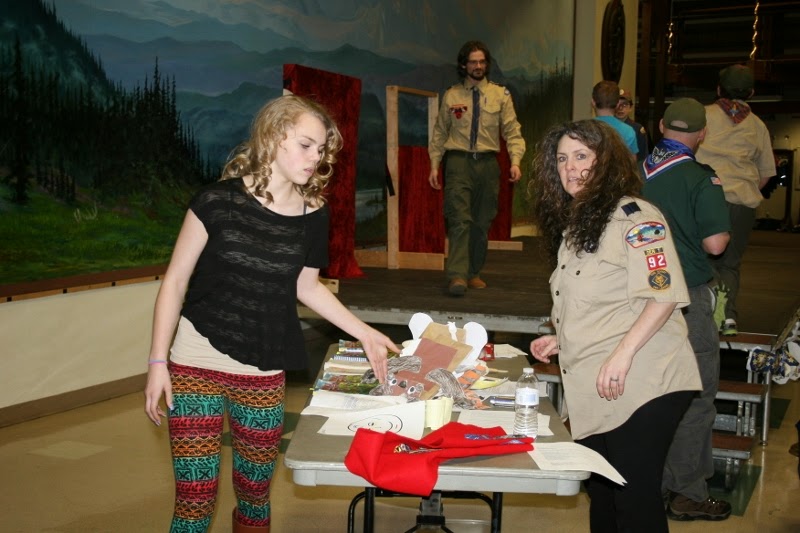 I have a special ceremony for each Den when they earn their Rank Badge. That's the Cubmaster reading the script. The ceremony involves face painting the boys. This is my Wolf Den. Eight of my nine boys met the requirements for their badge. 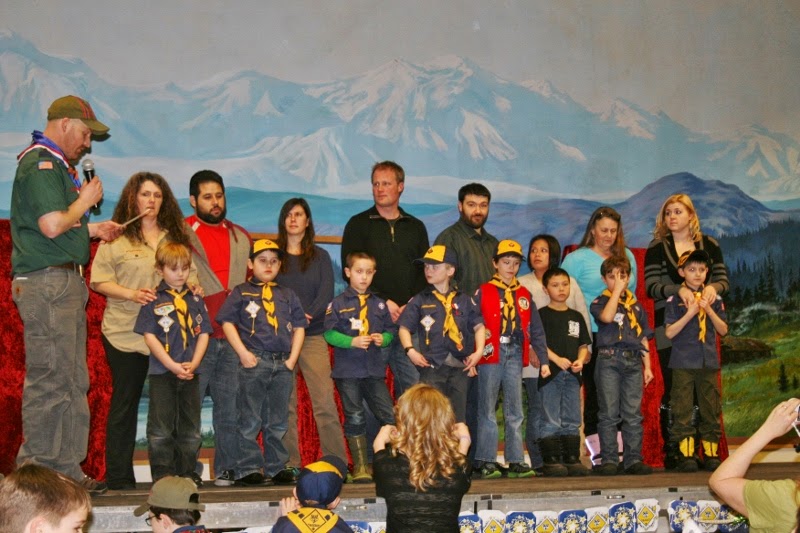 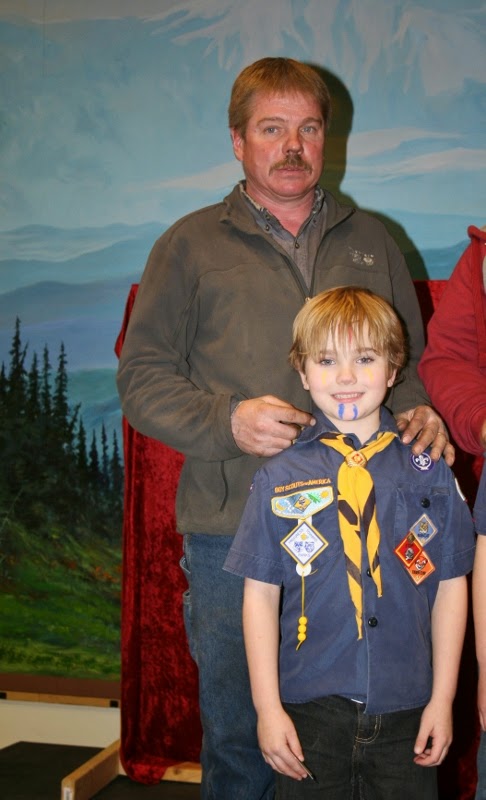 At the end of the night we had the Ice cream Trough. This is something we used to do 15 years ago in the Pack. It was pushed aside by the germaphobes. Us old-timers brought it back and the kids loved it (or at least the ones who had parents who would let them join in). 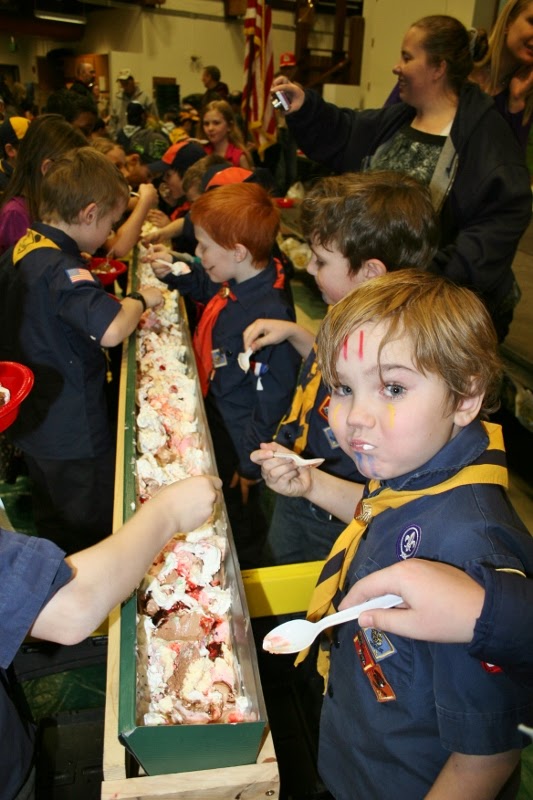 Wednesday the little ones had Ski Club again and then were up late for the season opener of Survivor. Nick took a few hours off of work to be here for that so we could pick our favorites.

Thursday I got Nick and Elijah to carry out the broken washer that has been sitting in the middle of Elijah's to-be-room-if-we-ever-finish remodeling. Then Emily and I cleaned out the whole space so work can begin. Homer has the the corners to put around the sliding door in the craft room and then I can start taping and mudding (after he shows me how). He'll move on to the next room until I am done painting and then come back to build my counters and shelves.

Last night Lucas had basketball practice at a school 25 miles from our house. You take several long, icy back roads so travel time is 45-minutes each way taking up 2.5 hours of the evening for practice! I left dinner for Homer and saw him for a late movie. Between his long hours of work and my running the evening activities we hardly see each other. 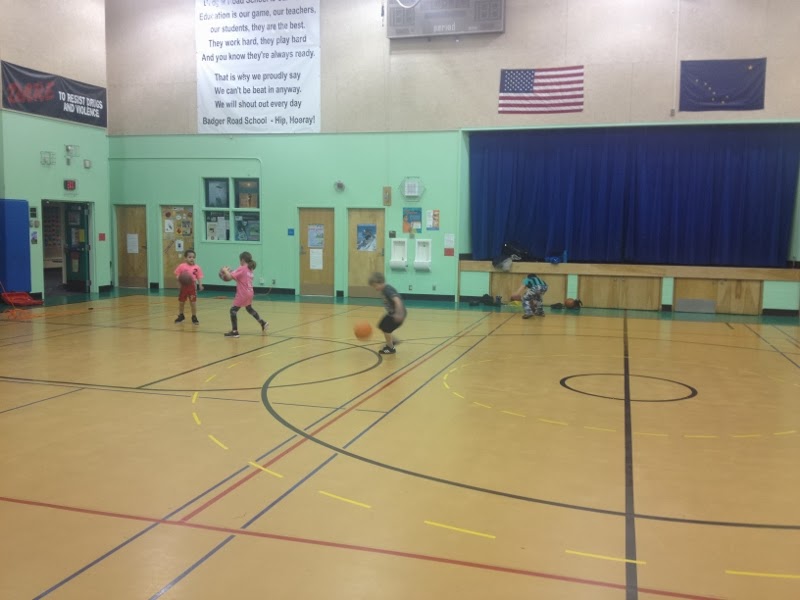 Before work yesterday Nick made Olivia and Lucas new shirts for Tie Dye Day at school. They were thrilled when they woke up this morning and saw them. Aren't we a tough bunch? Yesterday it was +30 and Lucas went to practice in his shorts. It is +12 this morning and they sure aren't bundled up, are they? Spring is in the air and the sunshine is wonderful after the long, dark winter. 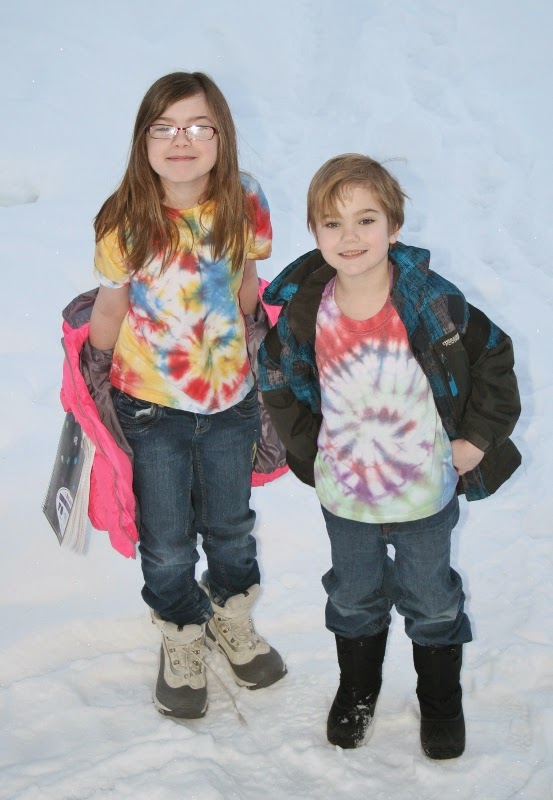 Speaking of Spring I should be planting my  geranium seeds March 1st and I haven't even ordered them. My plant room turned into storage again this winter and I can't even get in there. I have so much to do and it's been such an exhausting week. Guess I'd better hop to it.

Gayle, when they are all grown up and left home, ( and you have time for yourself) they will say that these were the best days of all!! Love the red curtains, ( and the theatre wood frame too) and Dad and Son, super. You put so much into the scouts, your family, maybe the garden will get there too, today is our first day of autumn, cooler in the mornings already. Cheers to all, Jean.

So many thoughts!
Wow~you are amazing to know all the kiddos and the time you have put in for them is amazing.

I think you look great! I love your hair and the curls are lovely!

For the trough idea~holy cow that is amazing! I think I will fashion something like that for the next family gathering. How fun!!!

I am feeling my knees but the more I talk to folks, the more I learn it is age that is making us aware of them!!!

Have a great weekend and I hope the kids sleep in(you too)!

Love the ice cream trough! Glad you brought it back.

Here I Am Carrie said...

I love the ice cream trough. Poor germaphobic kids and parents. Looks like you gave the kids memories to last a life time. I remember when I was in girl scouts I learned so many things. Girl I sure hope you are taken a break now. I have slowed down for the last couple of weeks to the point I think I am going to stop breathing. LOL Time to get my ass moving again. Take care both you and your family...