Man, oh, man.... life rolls right along, doesn't it? I always have so much to share and only get to bits and pieces of it. Guess it's time to start carrying a camera again.
Where did I leave off?  Last Wednesday I accompanied Elijah on his last meeting with his Probation Officer. It's been about 1.5 years of community service, meetings, urine tests, counselors, classes, locker inspections.... what a relief to have that done. His official end day was 11:59pm Sunday night. Yay!!! Knock on wood it's not something we'll repeat.....
That night I made Chicken Parmesan, marinated veggies and baked potato (all of which my husband drowned in pepper before I took the photo). I remember when I used to always take food photos.
﻿ 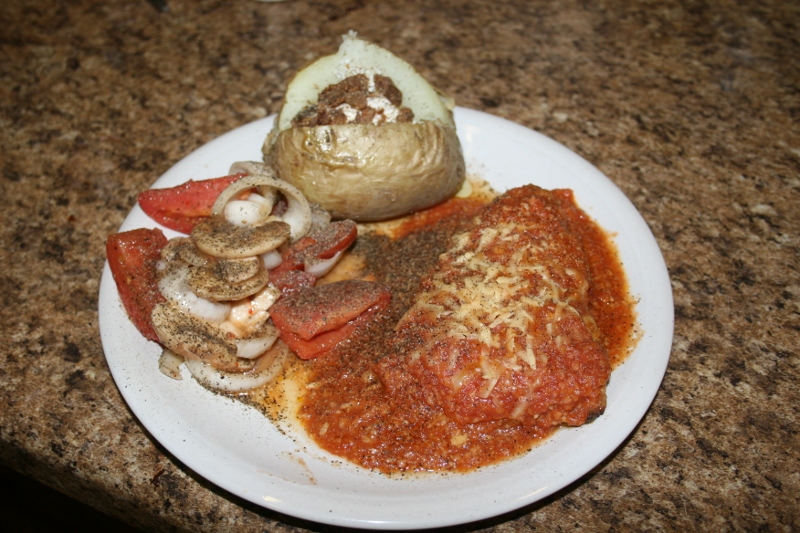 I even filled the decanter that we got as a wedding gift. I've been waiting 5 years for an "occasion" to use it and decided there's no better time than the present. 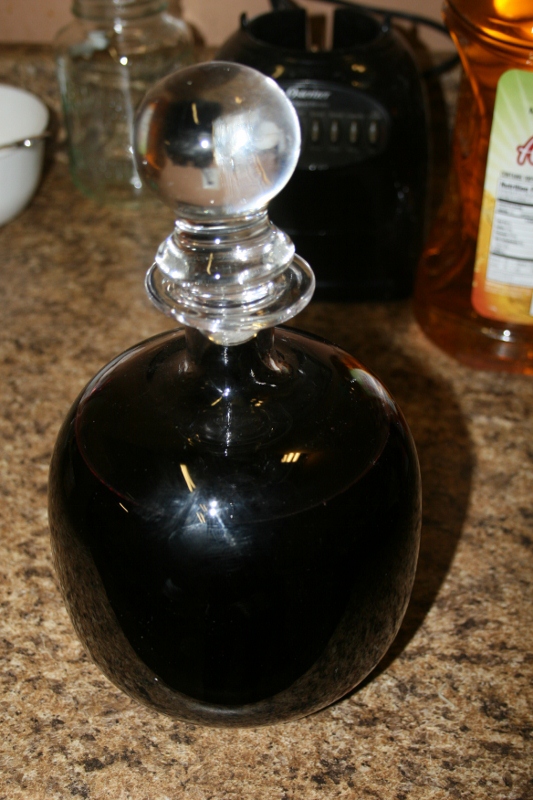 Thursday was a bummer day for me. Elijah had a basketball game out in North Pole at 6:00pm. At the same time Lucas had basketball practice half way to North Pole. Of course, I have to keep my obligation as a coach and it killed me to miss the game. I later learned that Elijah had the best game of his career. He was interviewed by the television station, but after two nights of watching the news they didn't use the footage. I was bummed. I guess the guy asked him what was up with his mullet and Elijah's response.... "It's fresh". Love it!! 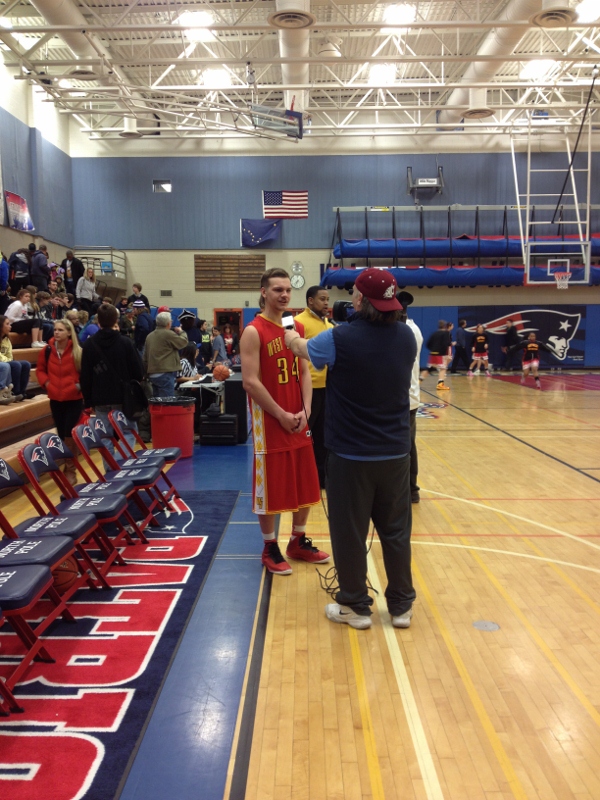 Side note... before his game I drove out to NP which is 30 miles from my house (20 from town) to take Elijah Subway before the game because he is the most spoiled player on the team. The roads were a complete glossy sheet of ice. We were down to 35 mph and that was too fast for conditions. Saw some pretty nasty crashes. I then went halfway back to town for Lucas' practice and then back out to NP to get Elijah after his game (I saw the last 2.5 minutes but he wasn't playing as we won by 30). He wanted to ride home with me otherwise he would have had to wait another 2 hours for the bus which would have gotten him home at 10pm. 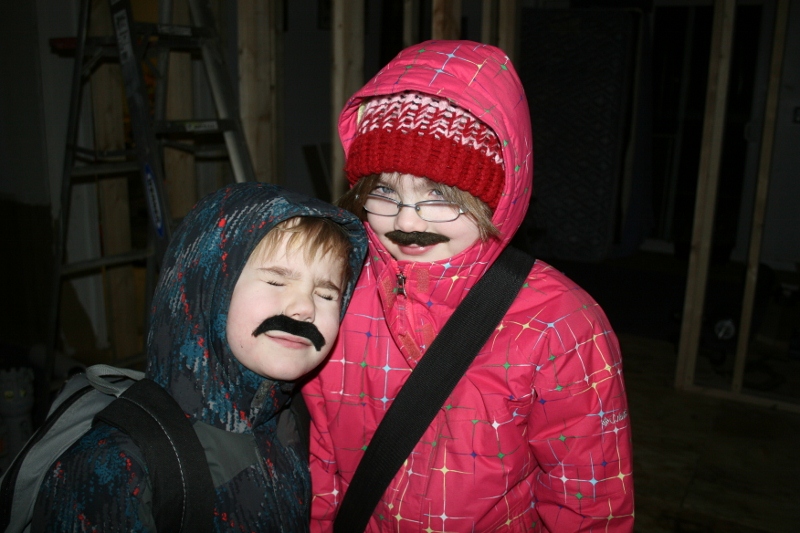 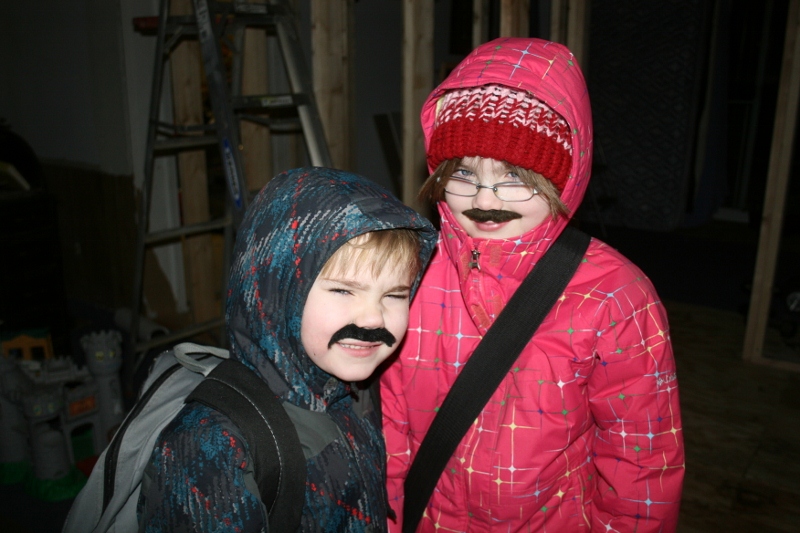 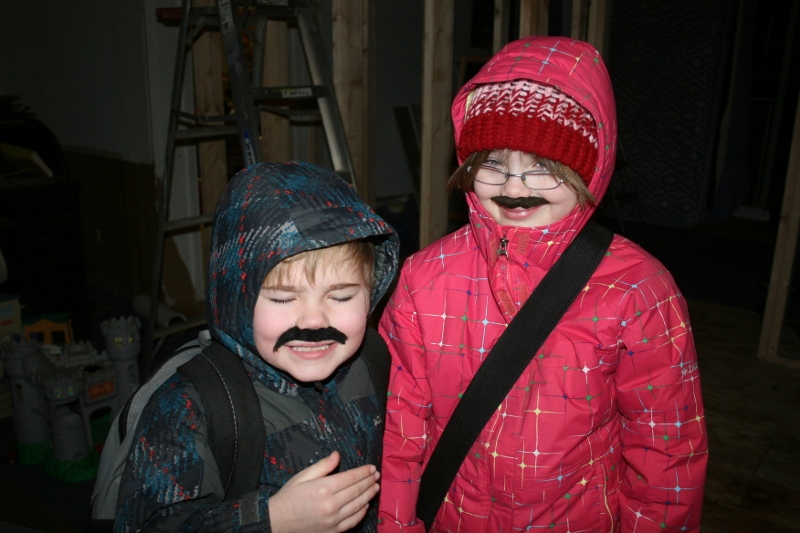 Friday was too much. I volunteered to make the concession/gate schedule for our home basketball games. I cannot get anyone to sign up to work even though every family has to do at least two 1.5 session (some of us 3). I am blunt about their duties. I got an email from someone I don't know cussing and calling me bad things and threatening to knock me out (it was a man). Unbelievable the new wave of parents I am encountering. Anyhow, I ended up sitting, by myself, working the gate for three games....4.5 hours... plus another 1.5 watching Elijah play. I was fried by the time I left that gym. I'm afraid if no one signs up for the last few games then no one will work. I'm not doing that again.I've done 7 or 8 sessions when I was only required to do 2-3.

This game was a disappointing loss that I'm not going to go into because I never know who reads here. Elijah was awesome and I was so proud. We lost by 4 points to a team that previously beat us by 30. A win would have been sweet. (My photos are crap... my camera needs fixed but it's hundreds of dollars I don't have. This is just frustrating).  Oh... did I mention it was like -30* below that day? Nice. 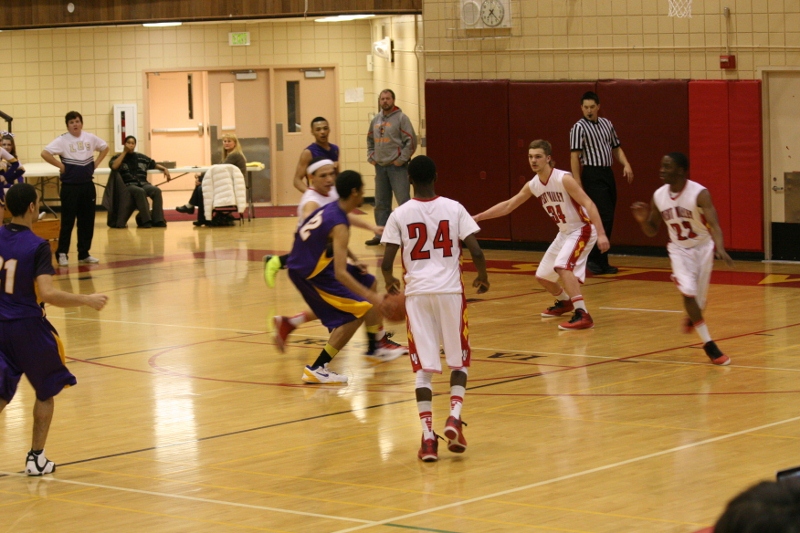 Saturday it was -40* below in town. We were in a deep freeze. Could I stay home? No. I dropped Elijah at bxb practice at 10:15am (his car wouldn't start) then Lucas had a game at 10:45am. After that we picked up Elijah, ate and went to 1:00pm bxb  photos for Lucas. Then it was off to the store to get Elijah pants, shirt and belt for the Ball that was later that night. God forbid that child would ever go shopping ahead of time. Nick was the same way..... hours before the event in a town with limited resources. I guess that makes the choices easy when they are out of everything. After that we ran by soccer equipment dispersal to see if Lucas' team had a coach. Nope. Guess what? Yep. I'm now coaching soccer. Two bxb a week, two soccer a week, 1 Cub Scouts per week, 1 or 2 HS bxb per week, homework, animals.... where do I fit in our home and legal court battles? I don't. (And isn't is lovely that I spent all day running here and there at forty below zero????).

Deep breath. I can do this. I have yet to ever not be able to handle something. Run into the ground. Yes. Tired? Yes. Cranky? Most definitely. Do I get it all done? You bet. Time to get my mind set.

Oh, I have no photo of Elijah dressed up. He went to his friends to get ready. He had a date I've never met. They all went to the Thai house for dinner and then to the dance. I'll never get a photo even though he promised one.

Sunday was another cold one. Homer ended up having to go to work for a little while to keep things from freezing up. He tore out a wall, but I haven't taken a photo yet. I worked on the house all day. Nicks had a couple days of part time work and was given a couple of dressers. He was going to use them to snowboard on. OMG!! I took them. We shuffled piles in our very undone house and I am using the drawers for my piles of bills and my piles of court paperwork (wait until I share the latest shit tearing us up). Not quite finished, but it is so much more manageable in here. Trying to get things neat for Super Bowl Sunday. 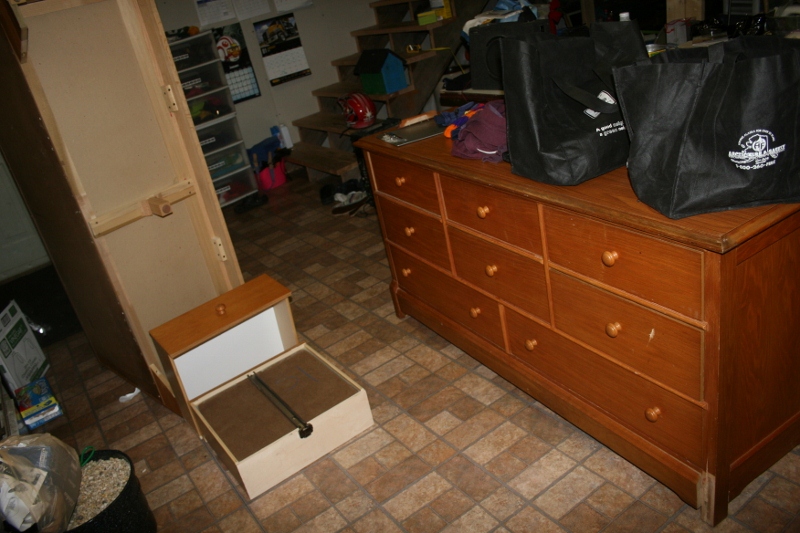 Today it was -50* and colder in some areas. Isn't that insane? Can you imagine?? Elijah's car is froze up at his friends house. Nick's van would not start this morning. My truck wouldn't start. Homer came home and gave Nick a ride to work. I finally got my truck running to take Elijah to class. Came back home to do nothing. Went back to get Nick. Came home and did nothing. Well and that's it. A nothing day. A little paperwork and dinner, but really it was a big nap and some TV. Some days I just say Enough! Elijah's practice and O & L's ski club were cancelled, but tonight it has warmed up to -16* and I think it will be even warmer tomorrow. Maybe now we can start the long, long march into spring?

Spring... ack... I haven't even ordered my seeds and I should be planting some next week. Lack of money. It's always something.

I'll leave you with this photo I stole off the Internet. I was commenting on Facebook about our drive through coffee huts and how we were so shocked we couldn't find one in Florida when we were there 8 years ago. Here they are on every street corner... sometimes two. Even the road grader stops in for a latte. This is the only way to go.... if I am going to spend $4 or $5 on one cup of coffee I'm surely not getting out of my truck and walking into some place to get it. :) 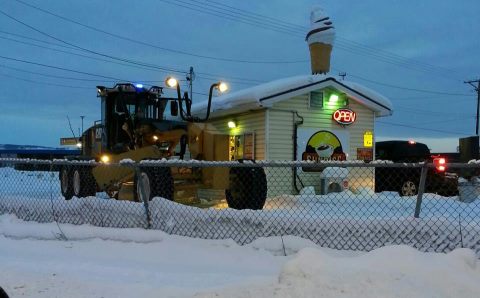 COMPLETION.....yes, I've still got it on my mind and I knit on a project whenever I can fit it in. I will complete something soon!!
So... tell me about your busy days. ﻿
Posted by Gayle at 12:50 AM

Gayle, HOW DO YOU DO IT? Really...HOW DO YOU DO IT? It makes my head spin just reading it! Lol and I was having a bad morning because I had to leave my puppy for two hours. Right on with the wine decanter--I use all my china, crystal, and silver in everyday occasions. I think if not now, when?

A Busy day, mine is a real walk in the park compared with yours.snow, freezing, love the comment on his mullet!! A sense of humour is a great talent to have, use it when you can. Lovely drawers, I would have grabbed them to use, too. Down here autumn is in the air, some leaves falling already, maybe with lack of water!!! Red skies, that vanish in a few minutes, but scorching hot in the day, up to 31.6C, sorry Gayle, not gloating, just commiserating, way too bhot to do anything outside after 10 a.m.Take great care on those roads. Greetings to all at TWH from Jean

Glad to see things seem to be looking up for Elijah....finally!