Good morning Jean ~ to answer your question.... my brother "retired" and move to California quite a few years ago. Now he is an owner/operator hauling loads from Washington State to Alaska to places like Walmart and Sam's Club. The winter run on the Alcan (Alaska-Canada Highway) is a tough one with lots of snow and cold. Really hard on equipment so this winter he's decided to just hauling in the Lower 48 which means he won't come my way until next Spring some time. 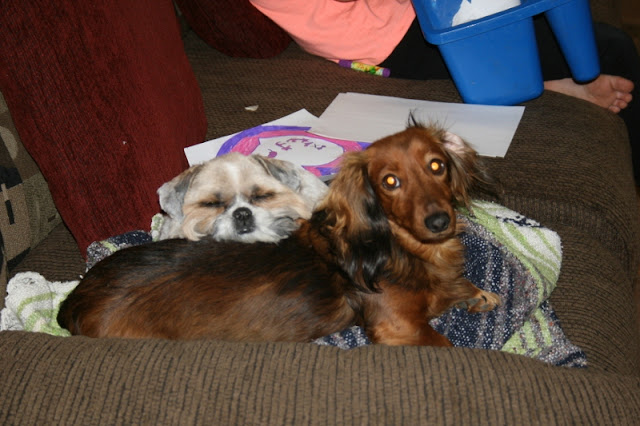 Do you do Pinterest? I held off a long time (much like I did with Facebook which is now my biggest time sucker), but now I finally signed up. If I had faster Internet I'd probably spend a lot of time on there, but it's slow and frustrating. I told myself for every 6 things I pin to my board I had to at least do one of them. (A lot of people pin, but never use the ideas). So Olivia and I baked... 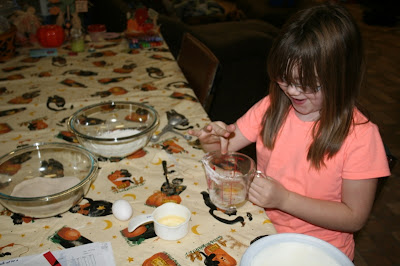 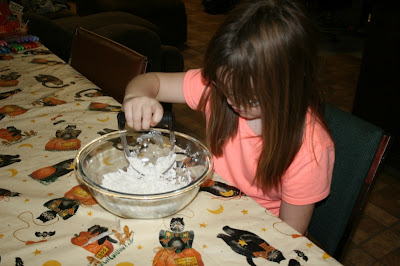 We made some bite size pumpkin pies and then one large pie. The top ones are with chocolate and the bottom frosting. 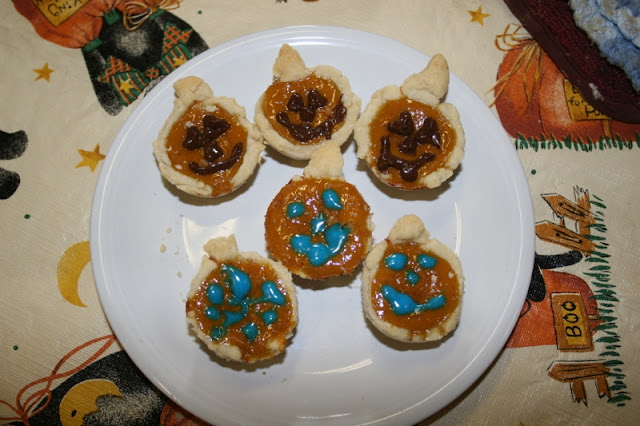 Here's Elijah's car. After three nights of male-bonding under a tarp with a space heater they got it put back together.  I like when Homer gets to do man-stuff with the boys. It's good for them. 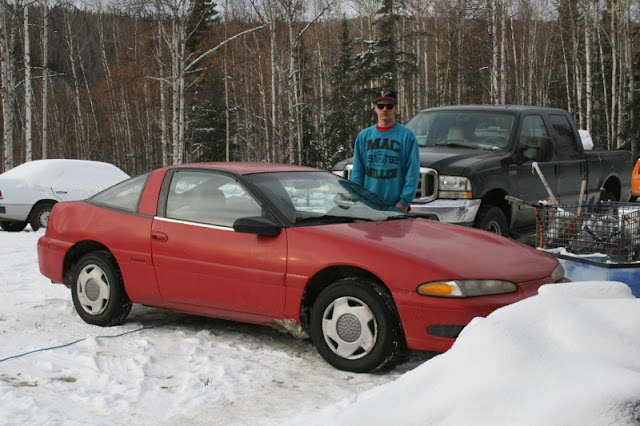 Olivia and I did some painting this past weekend as well. 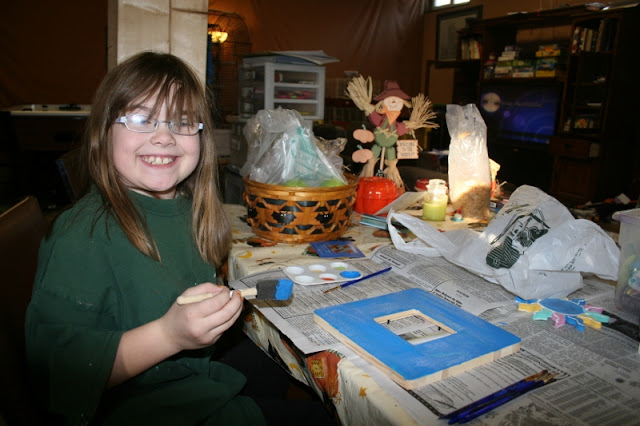 I made a shelf for Emily's room to hang her bath towels on. 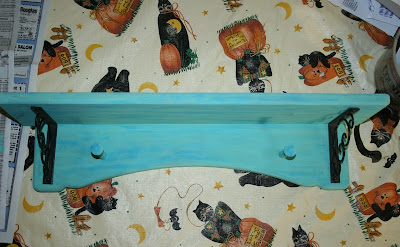 I still take the 180 Days of School Photos when I can remember (which is most of the time for these two, but not so often with Emily). Olivia loves to smile for the camera. 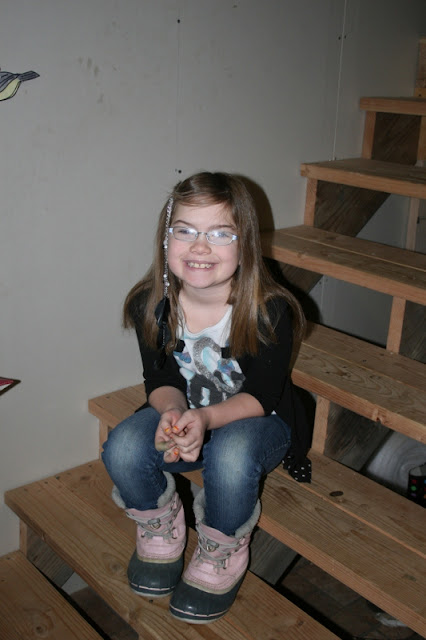 Half the time Lucas cooperates and the other half he looks like this. What a little stinker he can be. 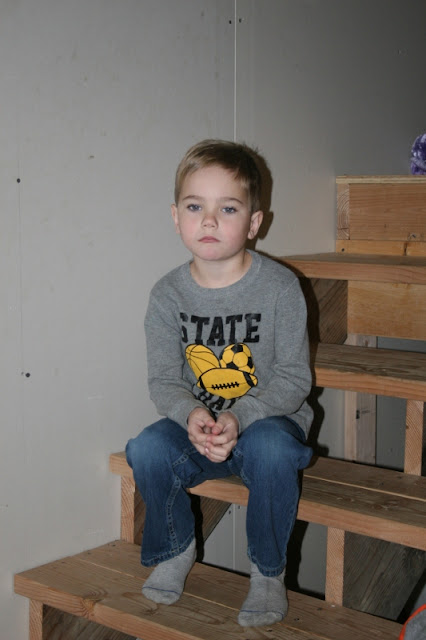 Last weekend we went to a bonfire with the kids and then out with friends. We do that once a year and I'm telling you that we're too old to roll in at 4:00am!! Sunday was spent lounging on the couch watching football and the World Series in baseball. How about those Giants?!! What a sweep.

Last night Lucas made his Raingutter Regatta boat as the Pack Meeting is tonight and they'll be racing them. 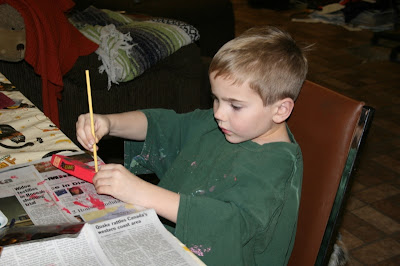 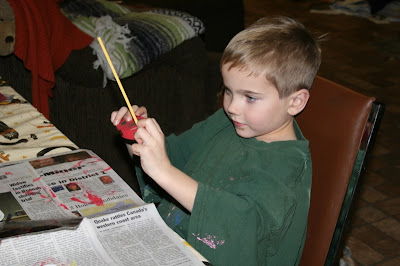 I was always the parent who did all the projects/homework/sports/etc. with my older boys so they missed out on doing guy things when they were little. I think it's important to develop all kinds of relationships so Homer helped Lucas with the boat rather than me. I'm sure they had more fun anyhow because I tend to "take over" and it's more my project then theirs. Aren't they handsome? Lucas looks just like his Daddy. 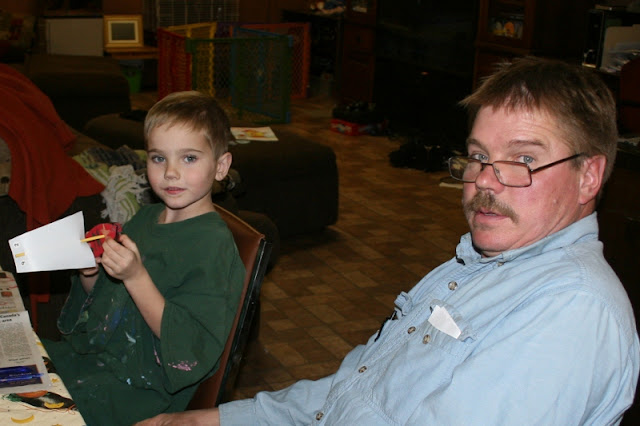 We had an extra boat because the first one didn't have a mast. Olivia painted it as a surf board. Elijah was busy tie-dying a shirt for spirit week (note box full of dyes he "borrowed" from Nick). Today it was pink day for Breast Cancer Awareness. I was washing the shirt at 6:30 this morning and then he ended up wearing something else. That child makes you beat your head against the wall. For instance this weekend multiple assignments were made up for the school days he missed. They were put into a folder in his backpack. Then at lunch I brought him a second folder with the rest of the stuff I had to print for him. So when he went to class he only took the second folder (not even realizing he had the first folder) and only had half his assignments. It takes a lot of patience to deal with head injuries and I hope I don't run out of it. 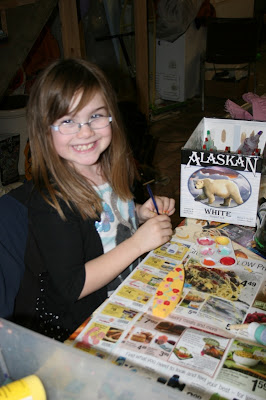 Yesterday I shoveled for an hour and then packed 2X6X12's (that were way too heavy) up the outside stairs to the front of the house. That took another hour. I need to make room upstairs and then I'll bring them in. It was some extra lumber that a neighbor traded us for Homer burying his water tank. We'll use it for building bedrooms.

We had a little snow storm yesterday and my bones were aching so much it truly was a struggle to get up and down the stairs. I'm stubborn and did it anyway which just makes me hurt more.  I really need to be more conscious of my health. I'm not getting any younger! I also need to get back in the gym. Stretching and low-impact movement is good for my pain plus I've managed to put on 20 pounds (really?) in the last couple of months. Being heavier makes my joints hurt even more.

What I really need is a hot tub. What a difference that would make! Someday..... :)

Olivia, I Love your boots, they will be so warm. Thanks for your brother's " retirement" venture update, sensible to stay south in the winter.I google your weather each day, and until I "MET" you, did not think about Alaska's daily temperatures.Now I look,translate to our Celsius, and shudder!!! Take care, keep warm, save for that spa. Fond greetings from Jean.

Love the picture of olivia on the steps with her little boots and the pic of Lucas on the steps cracked me up. He is exactly a mini homer, isn't he?

The projects with Olivia look like fun. Nice that Lucas had his boat project to keep him busy.
It's always good for boys to do some guy things like working ont he car.
Ah, a dog's life. I could get into that.

I do not do pinterest, but so many do on facebook that I get ideas. I would feel overwhelmed to have so many ideas and I am not so neat on my baking, painting etc lol.


Your kids are cuties and yes Homer part 2 is as adorable!!

As to a workout, I began one a few months ago as I was feelng sluggish. I feel invigorated~I say yes. Not for a 20 something body, but a body that can carry you to 80...or me as we are the same age!!

Thanks for all the photos...I do love the window into your alaskan world!!