This is the 14th year (including 2 years of preschool) that I have been sending my kids off to their First Day of School. Every year I take photos. So why did I sent my boys off with a smile and a wave and NEVER take their photo? Does it have anything to do with the fact that in dog years I would be dead? I think my mind is slipping....

I did remember to take Emily's photo. She looks like she is posing for a mug shot. Poor little thing was a bit of a zombie. The excitement and anticipation made her so restless the night before that she couldn't have gotten more than 5 hours of sleep.

The cutoff for Olivia to enter school is the end of July and she has a December birthday so she has to wait another year. We'll be having "school" at home. After showers she worked on writing capital and small letters. 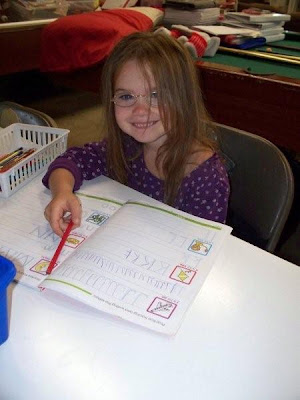 I tried to include Lucas, but after about 3 minutes he was gone playing cars. 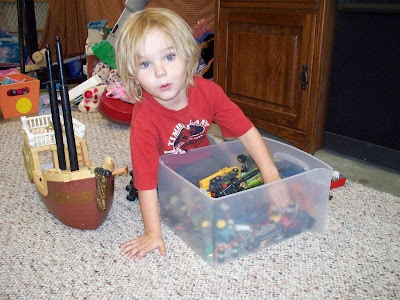 Then he proceeded to have a major 3-year old meltdown because I wouldn't let him play the XBox. He has become obsessed with video games, and I have to get control of it now. 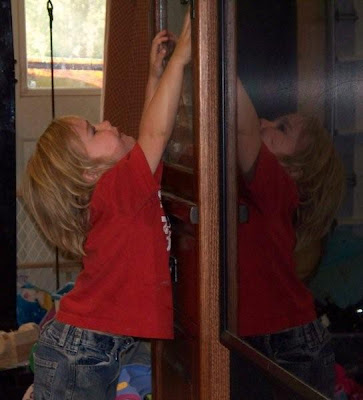 I did not give in to the pleading baby blues. 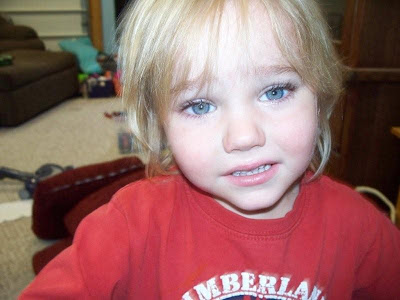 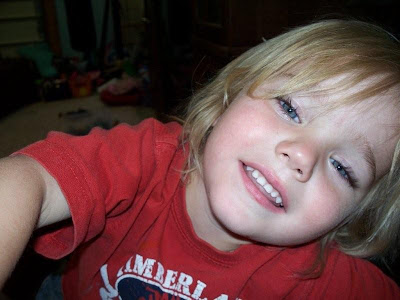 After writing her letters it was art time. Okay so I really don't have my act together with lesson plans yet so we used a coloring book for art time. I think my brain has to ease into this! :) 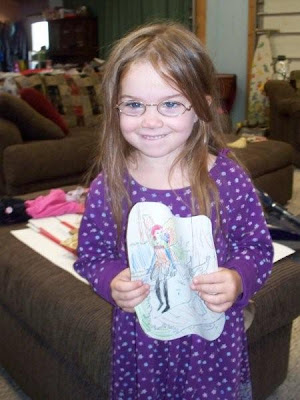 After that Olivia worked on counting objects and writing her numbers. Honestly, she would spend all day going from one worksheet to the next if I let her. 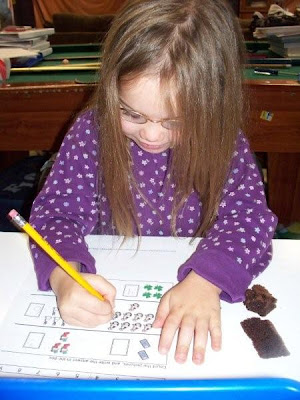 Again, the 3-year old boy wasn't as into it as his sister. He scribbled with a black marker for about 10 seconds. He was more interested in eating brownies! I don't blame him. 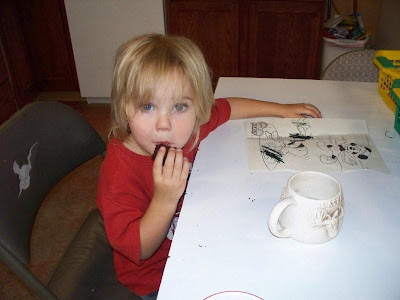 Every good school day has to have playground time, and since the rain was taking a break we headed outside. 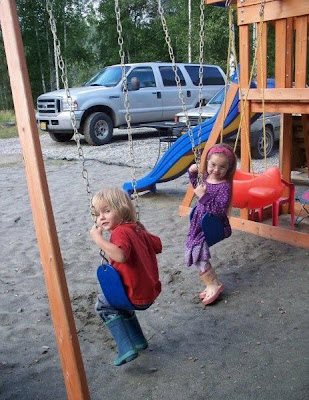 They love to help feed and water the animals. I hope that continues when they are older!
(note to those who don't Facebook with me...we had a tragedy the other night. A dog destroyed the chicken pen and killed all but three of the chickens. I'll never understand why an owner would love their dog so little as to let it roam and risk injury, but it happens all the time. Words cannot describe how sick I am about it all). 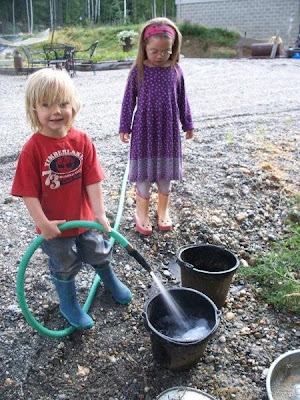 We spent the rest of the day playing until Nick, Elijah and Emily came home. The boys took off biking and skateboarding, the babies feel asleep very early and Em and I watched a movie together. (Dad's working out-of-town). Oh, and there was that mound of papers from all the teachers I had to read and sign. One day down....179 to go!
This morning Miss Emily was a bit more bright-eyed and bushy-tailed. Since Mother Nature is slowly destroying my gardens she took this bouquet of flowers to her teacher this morning. 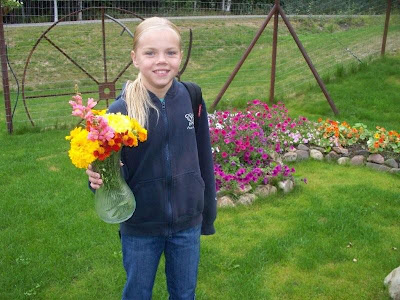 There is so much work to do and things to take care of outside as winter is quickly approaching, but the rain makes me want to curl up inside and watch a movie. Ahhh, I think this is what happened last year (and the years before that) and I was out picking up stuff in the freezing slushy snow. I promised I wouldn't let that happen again so I'd better get to work.

Lovely first-day-at-school photos and enjoyed reading about it. You have a very special family. I was so sad to read about your chickens though. I am so very sorry. I hope the dog's owners will take more care from now on. Here's hoping for your sake and for your children's as I can only imagine how upset you all were.

Oh I am so sorry to hear about the chickens. I hope they caught the dog before he kills anything else.

Everyone looks so bright and happy! Lovely photos!
I am so sorry to hear about your chickens. What a horrible thing to have happened.
I've never understood why people let their dogs run around loose either. I think they just don't care or are just ignorant.

I'm really sorry about your chickens. I have no use for people who have dogs and cannot control them. I don't imagine the owner will make amends with you for your chickens although it won't bring them back.

You all start school early. We start August 31st this year. Usually done in mid June.

Would love some of your cooler temps - it was 100 degrees in the shade on my porch this afternoon!! Winter can't come quick enough for me :)

It was first day back here as well today but, seeing as my boys are all grown up, it doesn't affect me now. I remember it well though. I hope yours are happy at school.

Olivia will be more than ready to go once her time comes. How nice to see her concentrating so hard.

It must have been very hard to ignore Lucas's big blue eyes! I bet they'll work wonders for him in the future.

How awful to lose your chickens like that. After all your work raising them. And they were looking great too. I hope you have better luck next time (and that dog stays away!).

I just don't think I could ignore those blue eyes. I would've caved in about 2 seconds.
I'm so sorry about your chickens. That's terrible.

First day of school here last Monday (8/10). My DD was so excited to get back to it and see all her friends!

So sorry about the chickens. How horrible! Has anything been done about the dog? What might it go after next??

Lucas has the most amazingly blue eyes! I'll bet it was hard to hold out and not give in to him!!

Aug 26th is our first day and I CAN'T WAIT!! Owen is bored silly and ready to be with kids his own age instead of the twins. The twins are ready to go back to preschool and Gage is going to walk soon!

Never a dull moment with lots of kids is there?

Oh man Lucas's eyes would make me give in every time!

Happy first week back to school.

so sorry to hear of your chickens. :( that sucks!

Looks like school is off to a great start for everyone! I was like Olivia, I'd do the worksheets all day!

I'm sorry about the chickens- that stinks!