For some reason in the new year I quit taking photos so life in the first week of 2013 is pretty much unrecorded.

The last day of break was Monday the 7th. We hadn't done anything for three weeks so the kids and I took a drive up to Chena Hot Springs for a swim. Elijah had basketball practice and couldn't go. It was nice and quiet on a Monday... weekends there are entirely too busy. The younger three never did go outside, but Nick went swimming in the outdoor rock lake that is quite hot. You have to be 18 to go into it, but there is an outside hot tub that is for everyone. 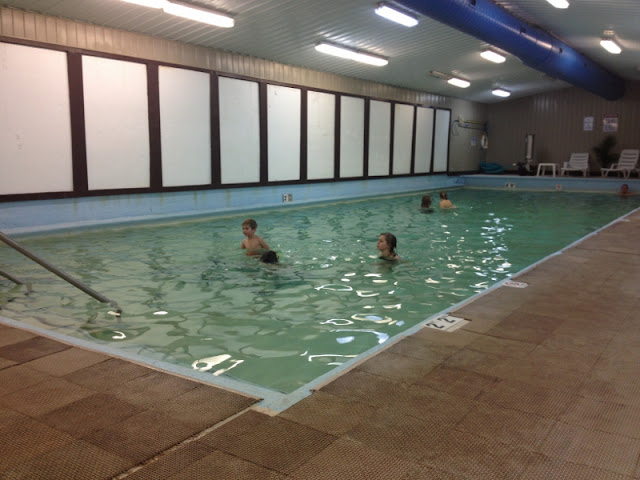 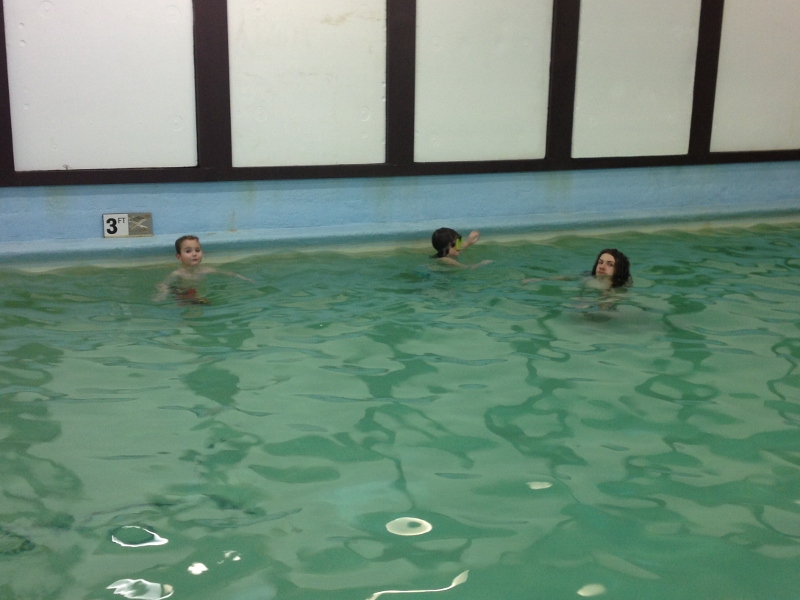 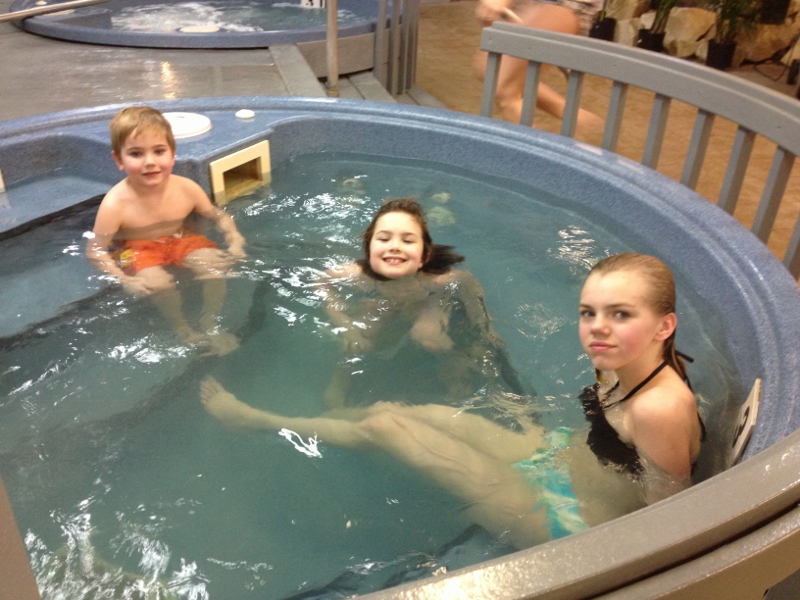 I didn't swim and once there wish I had brought my suit. A nice soak would have felt good. Next time.

This is driving in Alaska. Pitch black dark with the reflection of a few signs here and there. Lots of moose on this road so my eyes were busy scanning the ditch. 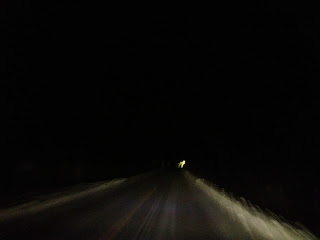 This moose has been hanging around our yard. Not such a big one so maybe a year-old on it's first winter without mom? I couldn't get a good photo before it ran across the road. 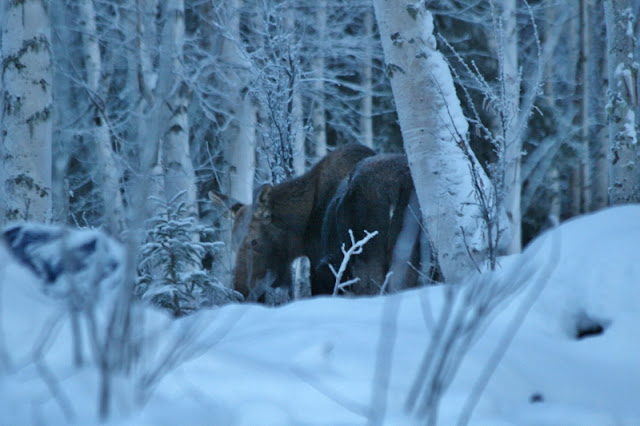 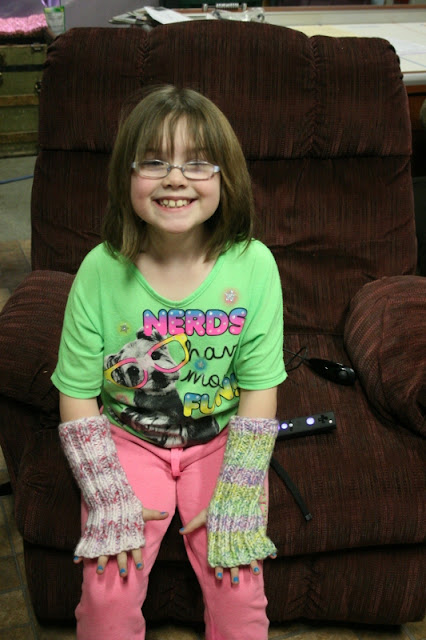 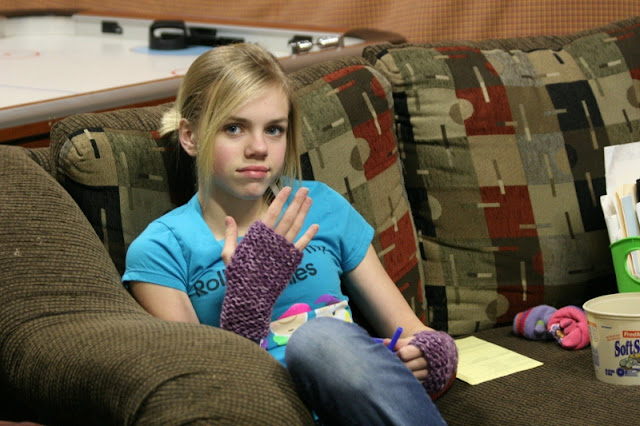 A hot pad with leftover yarn. 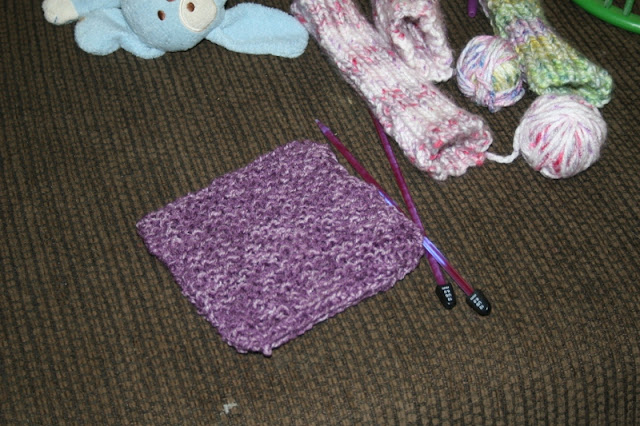 A hat for Lucas with more scraps of yarn. 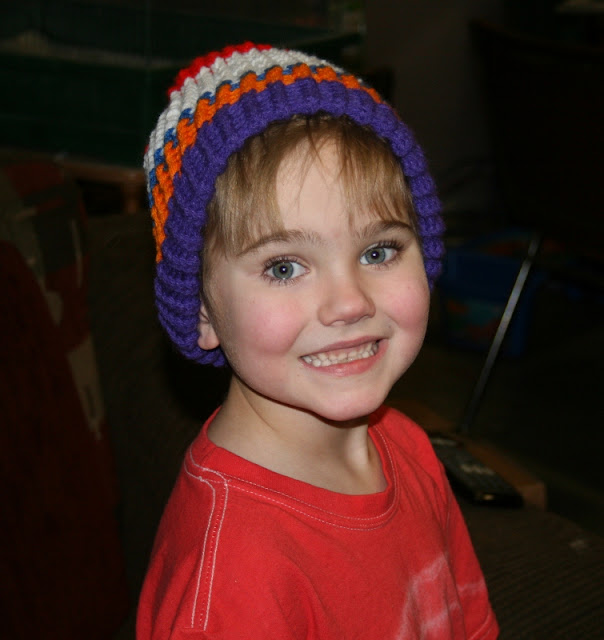 Last night we played a new game. We actually played with Olivia and Lucas, but forgot to take a photo before they went to bed. Lots of laughs.... good to do something besides be plugged into the television which  we seem to do too much of lately. 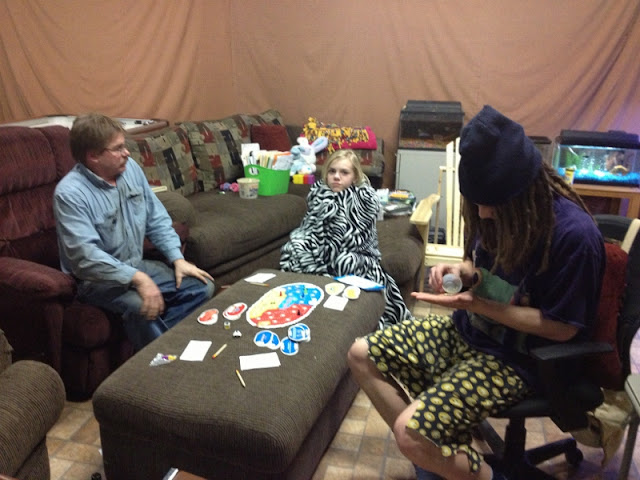 I put up some chore charts to see if I can get some help around the house. Nothing drastic to start with as these kids have spent their whole lives spoiled. I'm starting with them having to care for their own animals. Scheduled interaction time shouldn't be necessary, but with this new age kids don't seem to take the time for a pet like I did when I was a kid. Lucas doesn't get to play video games until he's held his bird and done his reading. Emily can't have her iPhone (which is similar to death for a teenager!) until she's played with both her dogs, held her bird and finished her homework . Olivia has to hold her bird and do her reading, but I really have nothing to "take" from her. Luckily, she's my one child who will do what she is told. :) Elijah has to give his dog attention and do his online school three hours a day (yes, he's homeschooling four classes and taking two at school.... he's was so unhappy there so we are giving this a try). If he doesn't have the required hours by Friday night he loses his car (again that is similar to death for a teenager). Nick has chosen to remain unemployed despite our prodding. I'm not throwing my son out so he is required to do 2 hours of something (other than video games & sleep) like cutting wood, vacuuming, dishes, I-don't-care-just-get-out-of-bed or he will be charged $17 per day he doesn't do anything to be taken out of his first paycheck when he goes back to the mine in April. (That amount is what his buddy pays for rent in a small cabin he shares with another guy.... a good deal for Nick considering I am not factoring in food, insurance, phone, laundry, etc.).

Day one was pretty good. Nick ran a chainsaw, Lucas completed  his tasks with only about ten minutes of whining, Olivia was no problem, Emily did half her stuff and then just stayed off her phone (?) and Elijah failed miserably which is what I expected. He's going to have to listen to me and do what he's told or he's going to fail, be ineligible for football and end up in summer school.

Elijah's in a basketball tournament starting today. His first game since his suspension plus added suspension (because he's who he is he sat out the required practices, he sat out one game and then the coach decided it would build character to not let him go to the Juneau tournament over break.... I won't rant but it was bullshit). I can't wait to see him on the court. He is so talented and could lead this team if given the chance. The first game players from last season got all the court time. We lost. They also lost the four games Elijah wasn't in. I sure hope it gets a chance to contribute and show this new coach what he can do.

Time to run. Taking him to get a haircut and Subway before his one class before the game. I like to do something nice before each athletic event he has. That kid has had a rough go at childhood. Lots of disappointments caused by his own actions and lots of things just done to him. We clash a lot, but I love that kid more than anything. Maybe this one little gesture he'll remember when he grows up and will know he was loved by us.
Posted by Gayle at 11:34 AM

Lots of good ideas for the rules and I hope those work out for you. Stay tough thru the first week or 2 of whining.

The best thing I ever did was make my kids start doing their own laundry once they turned 16. (I still fold it once in awhile to be nice) Also, since Chablis still hasn't found a job, she's cooking 3 nights a week for me. That's ALMOST worth her not getting a job. LOL.

I think he will remember it. When I was his age I went through a rough time of making bad (sometimes horrible) decisions. My mom held me accountable but stood by me. As soon as I was old enough to realize what an ass I'd been I realized just how much she stuck her neck out for me.

I think/ am sure , am totally positive, you have started off so well, jobs done then they are allowed their treasures or treats or, as teenagers, necessities!!!Stick to it Gayle, they will all be happier knowing what has to be done, I hope life is easier for you, and the long living turtle!!! Cheers from Jean.

Your knitting is darling! And your patience is inspiring.