Yesterday was Cub Scouts. What does that mean? That means I spent the entire day figuring out and putting together stuff for a two hour meeting with three six-year old boys. What does that mean? Nothing, I repeat, nothing gets done at home. I really, really needed to be out in the yard as I did not get the memo that it was going to rain today. Won't cleaning beds and tilling in the rain when it's 50* be fun? No. I'll probably end up getting sick.

What's that Tink? Attitude is a Decision? Yes, it is so I am going to embrace the fact that I am capable of working in miserable conditions and make the best of a bad situation.

I'm entirely too driven to be-the-best-do-the-most that I make myself crazy when coaching, leading, managing groups or teams. Here's how it went yesterday (and I'm so bummed I forgot to take more photos).

We checked off four achievements by saying the pledge, motto, doing the sign and salute. Then we had snack. While we ate we talked about holidays and celebrations. We talked about communication, how to tell stories and how to be a good listener. Then each boy told a story of a family celebration. Checked off two more achievements.

Then we went outside to run off some of their boy energy. We talked about kids from other countries and if we thought they played the same games they did. Then I taught them "Wolf, What Time Is I?" that is played by kids in Australia. Then we played a game from the Philippines involving a tin can, throwing flip flops and running. They loved them both!! Boom... checked off another task.

After running we got out the power tools. Ya, I'm brave like that. I helped them drill holes in a birch log. 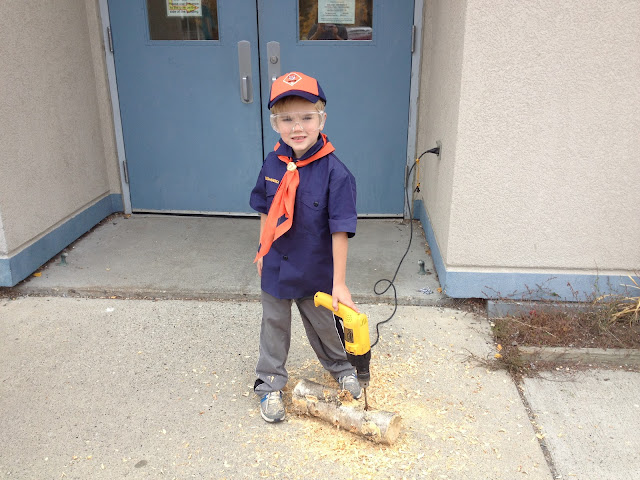 Then we mix vegetable shortening, chunky peanut butter, cornmeal, wheat flour and black sunflower seeds to stuff in the holes. Added a eye bolt on the top and they had a bird feeder to take home. Checked off two more achievements. 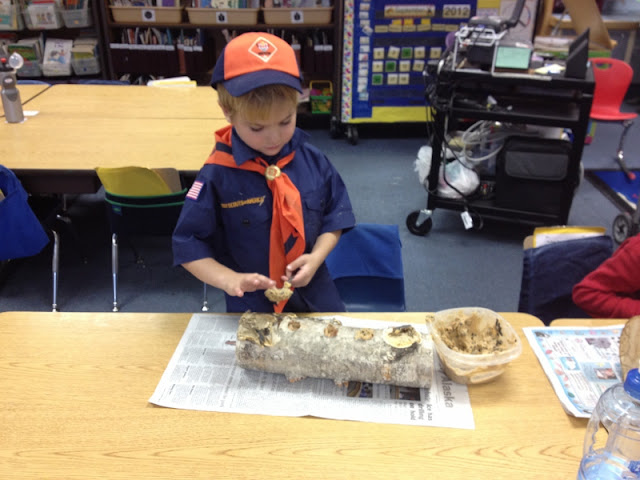 So in our two hours we checked off nine different things towards earning their Tiger Totem, Bobcat Badge, beads and belt loops. If anything I will have the most decorated Scouts.

And my word, isn't he the cutest little Tiger?

OMG - he is the cutest!! It sounded like a fun time for the boys. It may be extra work for you, but Lucas will love that you did this.

You are an awesome Tiger Scout leader! You will be remembered by those boys and will make a difference in their lives. If only more parents would volunteer and do a great job.

Wow! I wish my boys had you for their pack leader! They did very little at their meetings. I love the log/bird feeder...what a great idea!