Sunday morning was full of gray skies and chilly air. It took a lot of guilt to get me moving or it might have been that I was pumped up after watching Farve pull off a last minute win. Either way I eventually went outside to work on our unfinished Fall cleaning projects. We always have these since we go from Summer to Winter over night. Or so it seems. 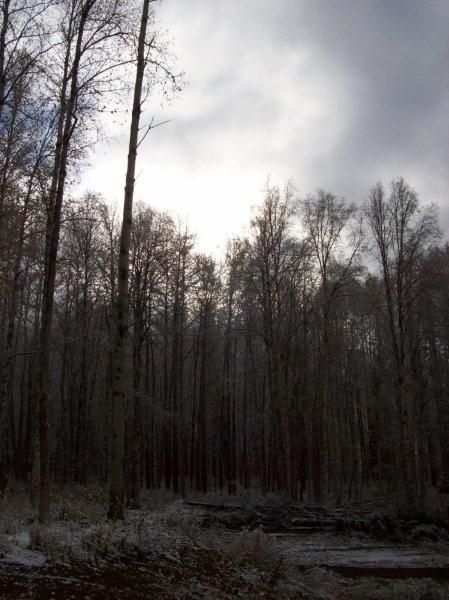 The Family Work Day was lacking in full-family help. Elijah was actually gone to a sleep over and Emily never quite made it to the work part. Playing with the little bit of new fallen snow was too much of a draw for her. 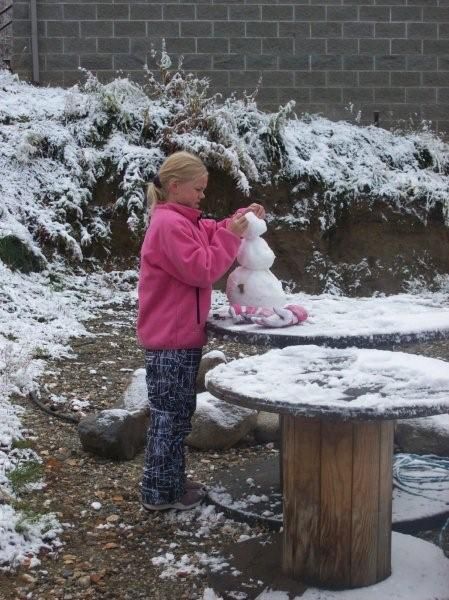 I managed to drag Nick up to help me finish cleaning the garden beds. All summer gardening was so not his thing so you can just imagine how thrilled he was about this job. He was a good sport though, as we always seem to find something to talk about. It was amazing how much faster (and more fun) this task was with help. Doesn't he look cold? He was. 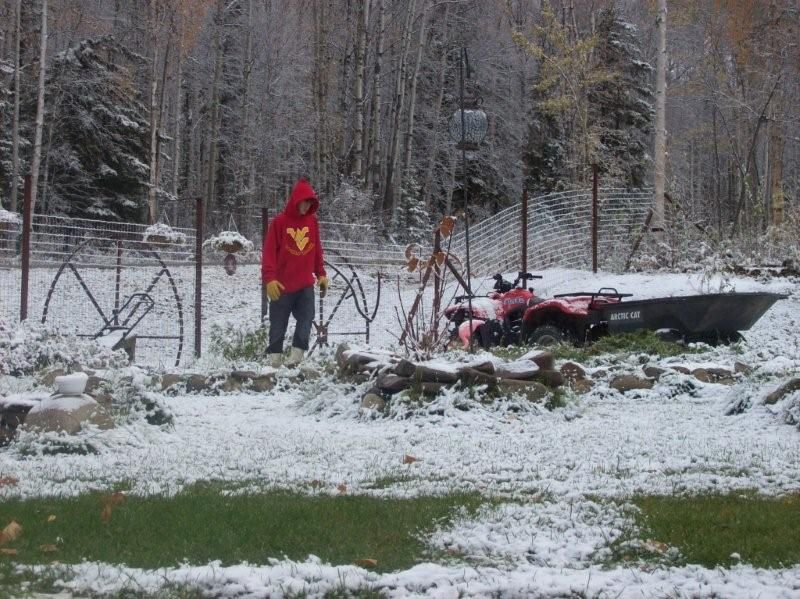 While we were freezing our fingers, Dad was moving the second connex. Originally it was up on the hill next to the lawn with the intentions of being gardening storage, but I hated looking at it. For now it has been moved next to the semi-trailer to store motorcycles, bikes, etc. for the winter. We have some gravel work to do before it can be put in its "forever location". Another project for next summer. 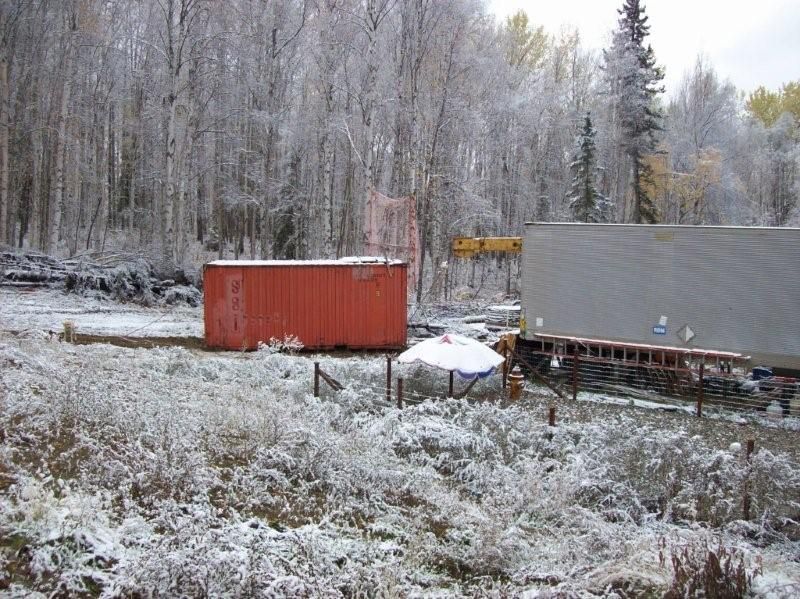 Apparently, I watched Dad too long because when I turned around Nick was helping Emily build little snowmen. Eventually, he came back to helping me. 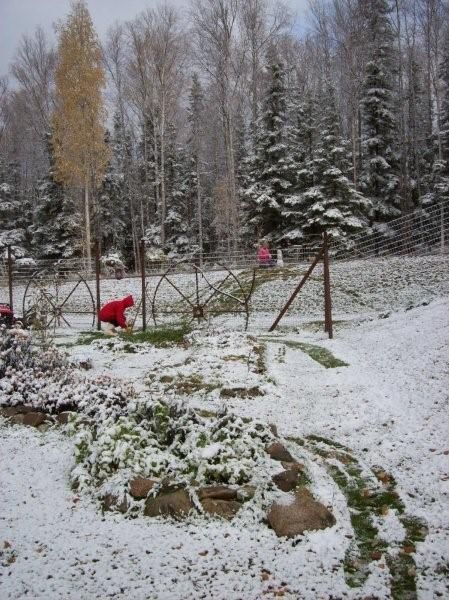 I wonder why this one tree didn't lose its leaves when the others around it did? 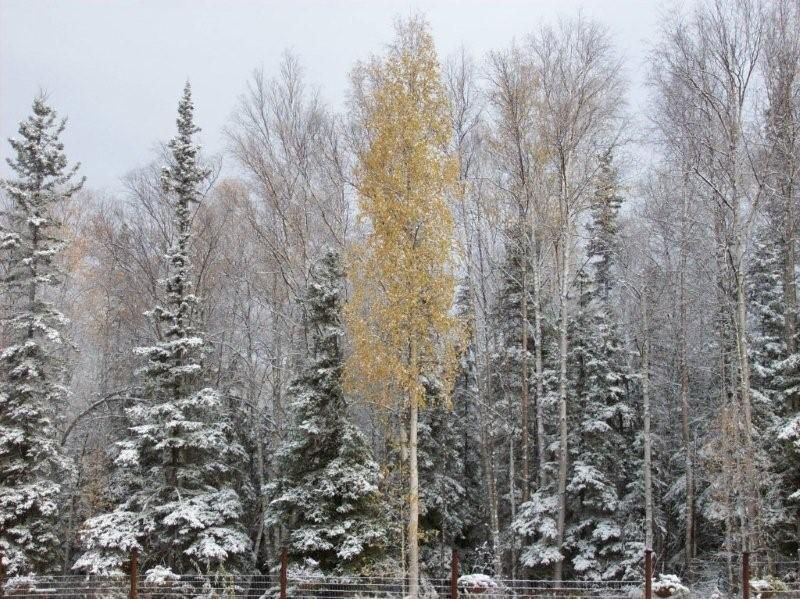 Roscoe was a little stressed about a connex flying by him. Goofy boy. 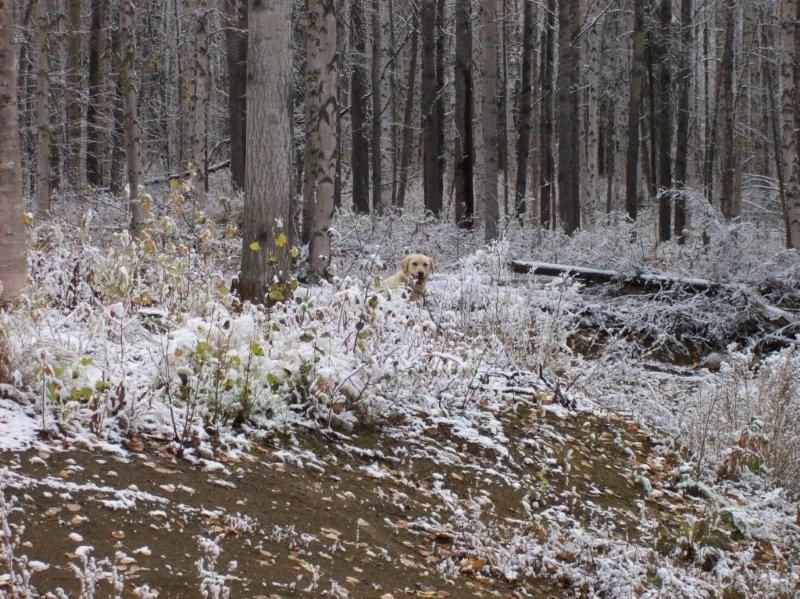 I wanted to get these leaves out of Daisy's pen before they were buried under snow. So much easier to clean up now then to rake it in the spring when they are all matted together. 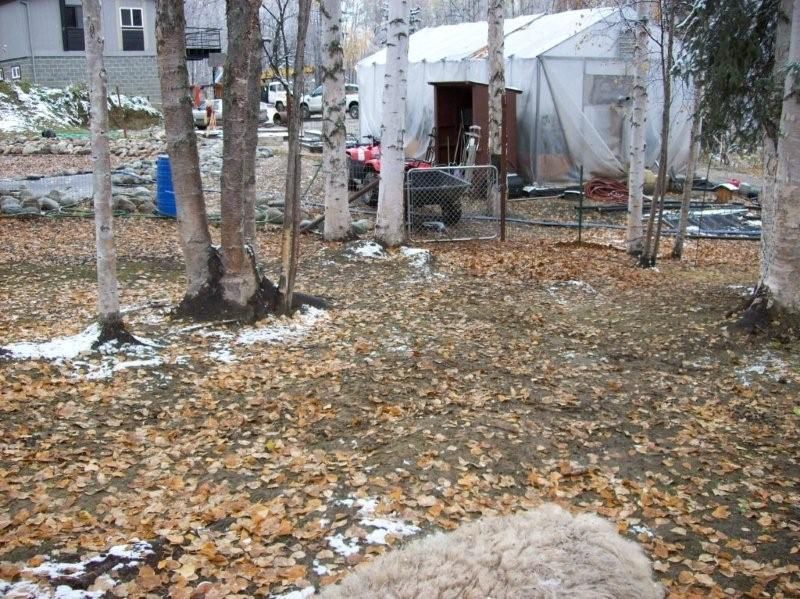 Two trailer loads later my arms were aching! (The actual area is three times what you can see in the photo). 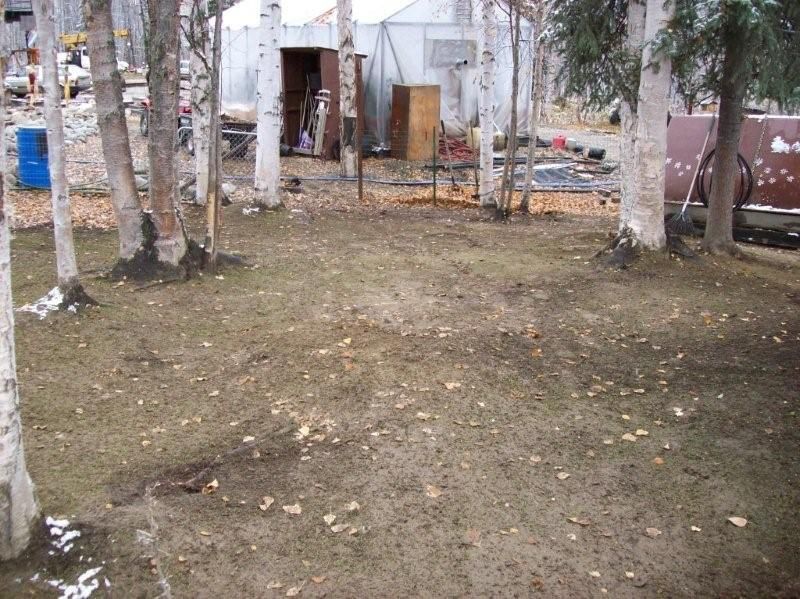 The girls lasted quite awhile outside considering it was pretty chilly for such light jackets. Aren't Emily's snow pants fun? They are actually boy snowboarding pants, but she loved them. Haven't found a jacket that we like yet, and nothing for Olivia, but I was able to get Lucas hooked up with snow gear. Haven't even thought about Nick and Elijah yet. I dread this time of year...coats, pants, boots, gloves...it really adds up to some big bucks with so many kids. 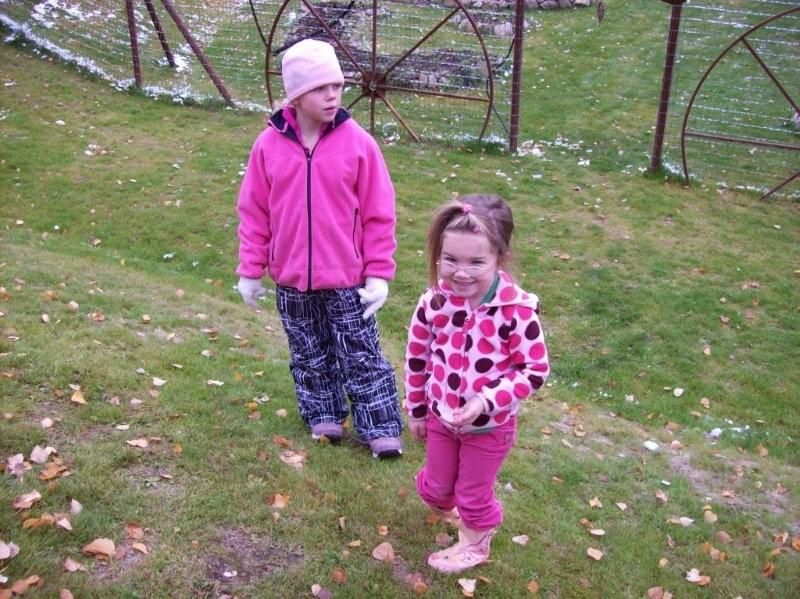 This was the third area I cleaned. One full load of leaves and old straw under the tarp. Trashed the old chicken wire and put the other stuff away. By this time is was getting to be late evening and I was to the point where I was chilled completely through and couldn't warm up. I did one load of brush along the driveway and called it a night. Still so much to do. 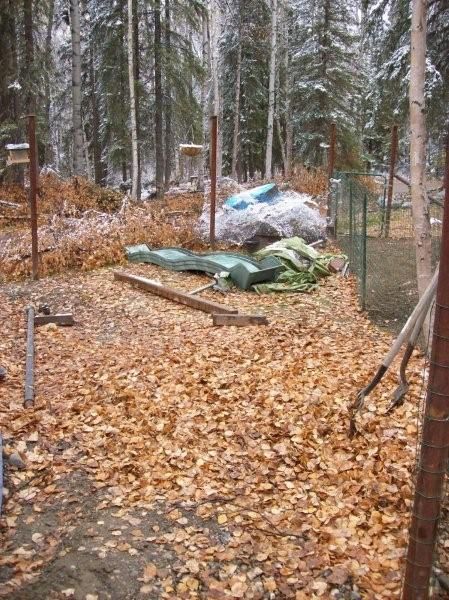 Here's the garden beds all cleaned out. Still have to store the chairs, tables and lawnmower. Tomorrow is another day. 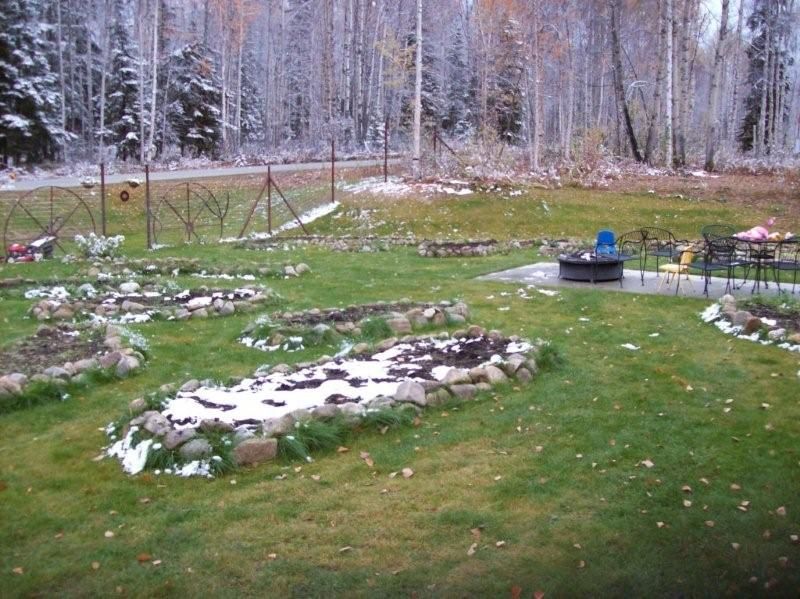 Give your daughter one special pedicure and she thinks it needs to be a nightly ritual. Is she pampered or what? :) 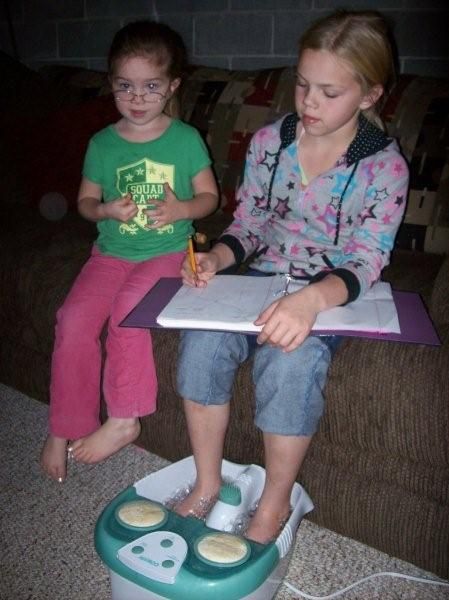 Monday has been a busy day so far already. Nick had one class at school and then a meeting with the correspondence program to pick his other classes. (Things just aren't working out for his Junior year at high school so he'll be cutting back to two classes at school and four online at home.) Then it was back to the school to do the official drop papers, and then finally home for lunch. I'm so glad we made this decision. He's already so much more relaxed, happy and stress free, and I have to be honest, I enjoy getting to spend more time with him. It's just like home schooling without lesson plans.

Well, it's time to head out to Elijah's basketball game. I don't think I'm getting much yard work done today. *sigh*
Posted by Gayle at 1:34 PM

I've been too busy for blogging (don't know how you manage to keep it up with all that you do!) so I'm behind with visits to all my favourite blogs. Thanks for your nice comments on my photos. You do pretty well yourself. I am still learning my way around my camera, definitely no expert. I'll help you with the photos if you'll tell me how you made your blog so much bigger! The images really hit you in the eye.

Wonderful pictures. I'm sure it's not so wonderful to you though, cleaning up, putting things away, buying winter clothing for every one.

Loved that shot of the one yellow leaved tree, really nice.

You are one hard working lady and I admire you.

Hard working is an understatement! I love see all the different parts of your property. Put your feet up girl!

to go! you did awesome. while you were doing all that, I was sewing. I should have been doing some yard work though....

oh and someday...I hope to be sitting through my share of basketball games. :)

You certainly got a lot done on your sunday work day. Not surprising that the first snow was a big draw for the kids!
I hope we don't have snow here for awhile yet, but we're getting a big temperature drop tomorrow and probably snow in the mountains.

You are always so busy! Makes me tired reading it all! It seems like just a couple weeks ago, you were planting all of your beautiful flowers and filling up the "pond"!

My 12 yo is doing virtual school, like you say, like home schooling without me having to prepare the lesson plans or buy the books! Although it means we are almost always together, it is much less stressful than I fear it would have been if she was going to the brick and mortar school!

Wow...that's beautiful...despite the cold and all the work y'all did. The shot of the one tree w/ its leaves is gorgeous...you should enter it in a photo contest...it would win!